During the 2010 General Election, my friend Beth made a very salient point, which has stayed with me ever since. Election campaigns are the best of times and the worst of times. They have a tendency to bring people together, and unite them for a perfect moment in a common purpose, but they also bring about that stomach churning feeling - that things are changing beyond your control. As a County Council candidate on Thursday, I've felt all of those things.

I was selected late last year to be the Liberal Democrats candidate in Frome North - a seat which we've held various parts of at one time or another, but which is currently represented at District level by three Conservatives and one Liberal Democrat (the fantastic Adam Boyden http://adamboyden.mycouncillor.org.uk). For me, my selection was a really personal thing. The LibDems lost Frome North in 2009, on a county-wide swing against us, and whilst the new Frome North consisted of a large rural area between Frome and Bath, I was optimistic of our chances. It's my view that we shouldn't have lost the old Frome North and that winning the new one was especially important as it comprised a large part of David Heath's old County Council patch.

My partner Josh Burr was also selected for a target division, the much altered Mendip Central & East area, part of which was represented fantastically well for nearly thirty years by Cllr Gloria Cawood and part of which was held by Conservatives. Both Josh and I were positive about our chances and - following our attendance at ALDC's Kickstart event last year - embarked on a pretty hefty campaign. I'll admit that there were times, when Josh was writing individual letters to hundreds of survey responses or when we were running yet another Connect list at two o'clock in the morning - that it all seemed like too tall an order. Being a County Council candidate yourself can put a strain on a relationship, but both running is nothing short of hell, if it's not organised properly.

Josh's campaign in Mendip Central & East will remain for some time, one of the best council campaigns I've ever seen. Whether canvassing for the Police Commissioner during a blizzard in Coleford, or delivering a leaflet whilst we should have been enjoying the downtime between Christmas and New Year - Josh showed a commitment and meticulous attention to detail that I only aspire to. Some of Gloria's ever so slightly frantic sense of purpose clearly rubbed off on Josh, and so it wasn't long before we were pulling up on verges to angrily interrogate some new fly-tipping or going to see a deliverer just to say thank you. Josh ran a campaign based on positive hard work and it's my belief that people will think of him all the more fondly because of it. 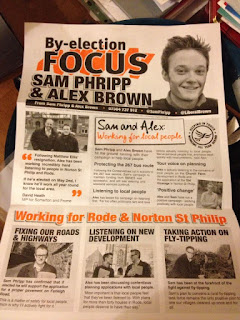 My campaign was rattled slightly, by the calling of a District Council by-election at the beginning of April. The sitting Conservative District Councillor in Rode & Norton St Philip had decided to resign, and so we now had two elections in the area on May 2nd. My good friend Alex Brown (@LiberalBrown), a resident of Rode and all round good egg was selected and worked incredibly hard to speak to his neighbours about his plans for the area. Alex is one of the kindest and most thoughtful candidates I've ever worked with, and I hope that when he comes to stand again none of that will be lost. He reacted with great dignity when the Conservatives delivered leaflets completely distorting the truth, and is a credit to our party. Whilst we shaved one hundred votes from their majority, we didn't manage it this time, and I hope Alex will stand when the seat is contested again in 2015.

Come Thursday evening, our committee room was at a complete loss as to what was happening. Our brilliant friend Claire Hudson, who helped us such a huge deal, called us in to say that she couldn't tell from the data what was happening. Votes were splitting all over the place, Labour were gaining, Blue Lib Dems were staying at home and what was happening to Weak Lib Dems was anybody's business.

In the end, the ballots were counted, mine were recounted, and the results announced. Despite running the most caring, well thought out campaign, Josh had been outdone by around two hundred votes. He came from being a virtual unknown, to equalling a sitting Councillor in his own village and beating him in the most unlikely areas - yet, still, it wasn't quite enough. Still, it doesn't feel like justice was quite done.

After my count was completed, I was ahead of the Conservatives by forty-one, and after a recount, I'd gained four more. On Thursday evening, at around 3am, I was elected County Councillor for the Frome North division of Somerset County Council - becoming the youngest Councillor by quite a margin and unseating the sitting Conservative.

I will never cease to be proud and humbled by my election, by the people that I know and live next to, and care about. But, I'm not jumping for joy. I'm not elated. I don't think I ever fully understood what my friend Beth had said, until now.

I will remember this campaign for a very long time, because it was the best of times. We were supported by the wonderful Nick Coombes and his friends from Bath. We had the strangest day exposing Tim Gordon to the wilds of the Somerset countryside, trying to find yet another Hillside House. We were bowled over by the kindness of our friends Claire Hudson and Damon Hooton, who went to the ends of the earth to help us.

I'll also remember it as the worst of times. Josh and I delivered Coleford repeatedly, often on our own, often in the driving rain. Gloria once again came to physical harm whilst delivering leaflets to areas so remote that it could be considered a public health risk. Josh and I were driven not-so-quietly mad by the pace of the campaign - something I only realised when Josh shouted 'for goodness sake, if you don't stop singing like Heather Small and let me listen to BBC Somerset, I'm stopping the car and you can get out'. Josh did absolutely everything he could to offer the people of his area a strong and valid alternative, and we now have to face the sad truth that this time it wasn't enough. That's hard, but I know we'll be fine.

This campaign was exactly what Beth was talking about, but it also reminded me why I'm a Liberal Democrat. Because it's full of people that have become my family and because it's my home.