What do you remember most about your childhood?

Often, the answer is being stuck in classrooms, being taught things that wouldn't come in helpful - being bored. I suppose in some senses I'm lucky, because my memories of my early childhood and my education weren't like that. I was always inspired in some way or another - and I think that's what makes the difference. I'm a great believer in the idea that good, solid inspiration always trumps adversity. It's that belief which leads me to be slightly concerned right now, and I'll explain why.

For thousands of people who were just the right age in July 1969, Neil Armstrong's death last year made an incredible impact. For those people, perhaps ten years old at the time, Armstrong changed the world. His actions meant that a twelve year old in a mining town in Wales, or a nine year old (more later) raised on a corn farm in Ontario, Canada could be the next generation in space flight. Now of course, most of those people who saw the pictures in the newspapers, or saw the event on television didn't become astronauts. This isn't the Jetsons. But what did happen, is that those people saw what was happening in the world around them, and for even the shortest moment believed that anything was possible. 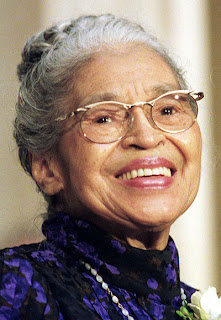 For me, the same thing happened a few times while I was at school - not in the same way of course. When I was twelve, I read a book about the life of Rosa Parks. Ms Parks has become famous for playing an instrumental role in the struggle for Civil Rights in the 1960's. To me, she's probably even more of an inspiration because for a great deal of her life she shunned the media spotlight completely, preferring to live in some kind of privacy. Not that she shunned the interest in her life, just that she was a quiet and gentle woman who didn't want to be a celebrity. For me, Ms Parks was an incredible mix of great strength and great humility. Two things that anybody would be right to try and emulate.

A second thing that shaped my formative years, was a talk at my College given by Caroline McGann, a woman who made Music Videos for endless numbers of incredibly cool people. Caroline actually lives near my home town, and is somebody that I had the great pleasure of interviewing for local radio some time later. Caroline has led a varied and interesting career, from the very inception of modern music videos (things like Video Killed the Radio Star) right up until she decided to step back from the music industry. Now, clearly, I haven't become a producer of music videos, but I do remember being absolutely fascinated by her talk and going home that very evening and wanting to write her a letter - to find out more.

That's the key - it's a spark. It's the split second that makes a child think, 'this is something that interests me, this is something that I can do'. I've never had a problem being inspired by things personally, if anything I'm too easily inspired by things. The other day I caught myself wondering whether I should sign up to study the art of Bonsai and try and become an expert or start writing a novel that I've been planning for a long time. Inspiration isn't the problem for me. But, for thousands of young people right across the world, igniting that spark - like Neil Armstrong did for the boy in Ontario - is half the battle.

One of my concerns right now, is that we don't seem to have nearly enough heroes for the number of children being born. In the UK at least, the very foundations of what we believe to be right and true are being shaken again and again. Whether it's a shamed children's TV presenter, that generations looked up to or the fact that people can't even trust what meat they're eating, a lot of accepted truths and norms are being challenged right now. It concerns me, because if I, as a twenty-one year old find myself at a loss for what to believe in, what do people younger than myself think? What do they believe in? It was frustrating yesterday to watch Louis Smith, the Olympic gymnast on Saturday Kitchen. This is a person who young people are engaged with and look up to, and what was he doing? Going on TV, to try and plug a new yoghurt he's contracted to promote. Is that inspiration?

I don't mean to do Louis down - we all have to plough our own furrow - but he's been given a real opportunity, and if he deals with it correctly he'll do far more than sell yoghurt. 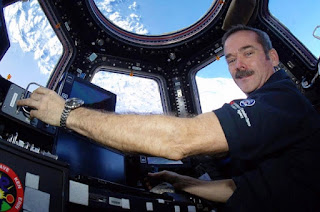 The nine year old boy from Sarnia, Ontario turned out to be Col Chris Hadfield. After watching the Apollo missions on TV from his home in Canada, Chris was inspired to follow in the footsteps of Neil Armstrong and is just about to leave the International Space Station to touch back down on Earth. What Col Hadfield has done whilst orbiting the Earth is to engage with as many people as possible through social media - to touch as many lives as possible. He has around 245,000 people following his journey on FaceBook and 773,000 through Twitter. There will be a generation of young people (myself included) inspired by Chris' commitment, by his intelligence and by his humanity. What's more, on May 8th, he sang his song 'Is Somebody Singing?' with school children right across the globe. In that moment, young people were a part of something that they won't forget. Everything was possible.

That's what I care about. Of course, it's important and right to ensure that all young people are provided for properly and taken care of. Of course, it's right that teachers should be helped to be all that they can be. But what shouldn't be forgotten is the fact that ultimately, children need heroes. Children need people who will make them believe that whatever is happening, however tricky, or boring, or painful, is only temporary. Children need to know that they are important and valued and that anything they want to do is possible. Children need and deserve people like Col. Chris Hadfield.