A lot has been said over the last little while about UKIP, and whether or not they've rebalanced the British political establishment, or whether they're just having their five minutes in the sun. So, is this a new dawn, or Faragemania?

I don't know, but there are two things I am confident of.

1. UKIP succeed in a vacuum.
One of the things that has been most readily apparent to me, is that, putting social demographics to one side, we do less well against UKIP when we're complacent. In our area, we have a pretty big group of people that we consider to be LibDems in one sense or another, and for the past decade or so, they've been a reliable base. That equation doesn't work any more. Those people were a reliable base for us when the big three parties were the only real options. Rightly or wrongly, UKIP are now seen as a viable choice at the ballot box and so we can't expect historic LibDems to stump for us if they aren't given a convincing reason.

In my County division, the UKIP showing was pretty small (the same with my partner's...), in other areas considered 'safe', UKIP polled higher. A part of me thinks that it's because people have been taken for granted in one way or another.

2. Don't forget the fruitcake narrative.
David Cameron has been left red-faced, having to back-track after calling UKIP candidates 'fruitcakes' recently. Now, clearly, it was a pretty silly thing to do in the first place, but the nub of the point is still valid. Due to their massive increase in activity and membership (and due in no small part to this phenomenon happening at the same time as the implosion of the BNP...) UKIP have not properly vetted a lot of their candidates, and therefore, their councillors. For me, a key point is that in some cases, UKIP councillors probably aren't fit people for the position, and that in some cases, they'll be ex-BNP supporters. No, it's not right to call them fruitcakes, but it is right to sound them out with vigour. People voted for UKIP without giving much thought to who their candidates were and what they stood for - I'm a great believer in the British public having good morals and good common sense, and so where UKIP are hiding secrets, they need to be outed.

Anyway, those are just my thoughts. Here's a gratuitous picture of everybody's favourite right-winger. In this picture he looks like a cross between Toad of Toad Hall and a Dickens character called something like 'Mister Herbert Grince'. 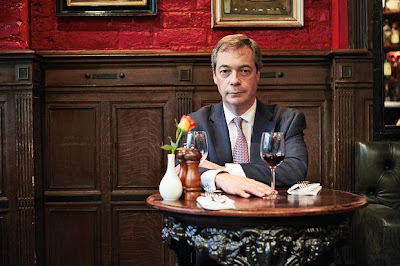