In defence of Myleene Klass

Here's a thing. I didn't see The Agenda last night. Why? Because, if Question Time makes me angry, I'm only going to be angrier with the version that is terribly chaired, never really politically balanced and that looks like it's filmed in a nightclub that closed down in 2002. There, I said it.

Similarly, other than a brief bit of reading this morning, I'm not going to even start questioning Myleene Klass's treatment of Ed Miliband over the Mansion Tax. What I am going to talk about is the online reaction to Myleene's appearance, because something interesting is happening. 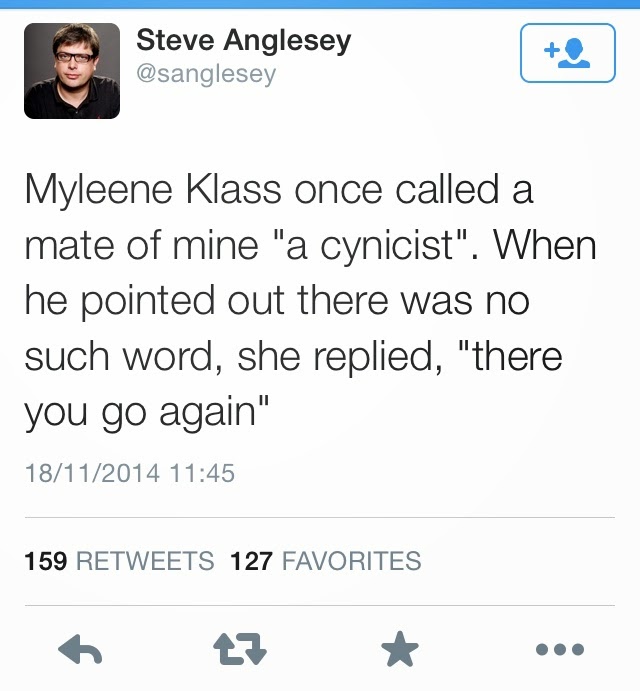 The point of this one, surprisingly, has nothing to do with Mansion Tax. It focuses on belittling Myleene Klass and calling her stupid. Later, from the same account, we have - 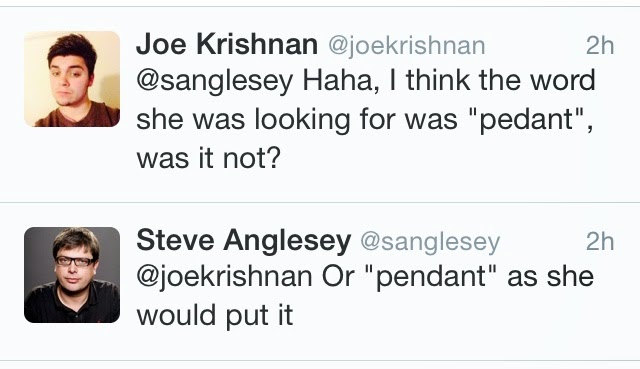 LOL. We're big men who can make a joke about a woman being stupid without even indirectly referencing what she was talking about. *slow clap*

Then we have this delightful addition to the debate from @WellMax81 ...

A whole award ceremony? You really shouldn't have, Anthony. Once again, somebody talking about what a 'stupid bitch' Myleene apparently is, rather than accepting that you disagree and taking apart her argument on the Mansion Tax.

Then we have this from 'Dom Hancock'...

More offensive still. Again, not a mention of the Mansion Tax, but a big mention of Klass being 'talentless'. Now, sorry, Dom, babes. Have you ever seen Myleene Klass playing the piano? She's incredible. That's talent. 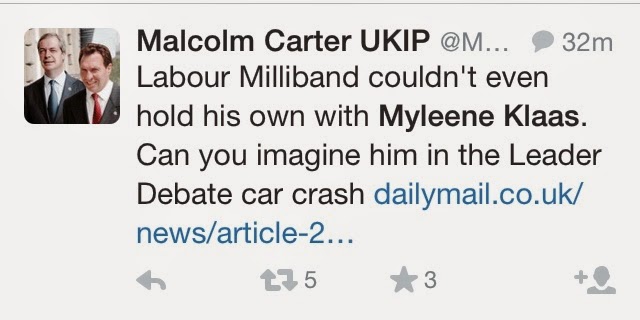 Malcolm Carter - such an asset for UKIP that I've never heard of him. Here we have the insidious suggestion that Ed Miliband would make a terrible PM because he 'couldn't even' hold his own against Myleene. Ed Miliband would make a terrible PM for a number of reasons, but the suggestion that Myleene should have been some kind of easy fight is really offensive. Is it because she's a woman, or because she's a TV personality? Either way, this is idiotic.

Then, things move on and we get nastier. Again, people calling Myleene stupid rather than responding to her comments, but this time, getting more offensive. 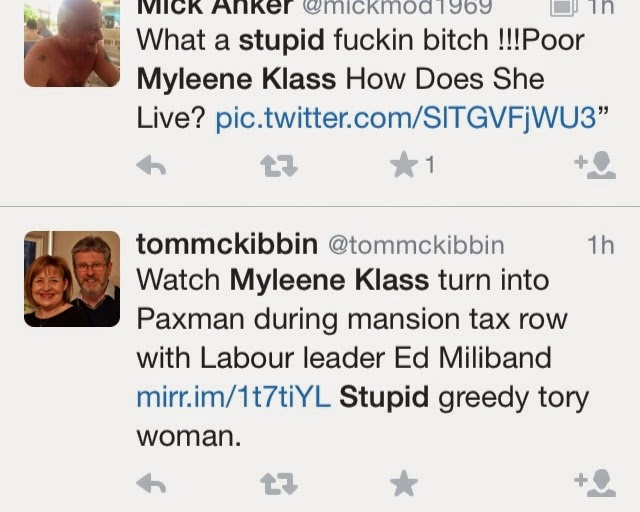 So, we have 'stupid greedy tory woman' and 'stupid fuckin (sic) bitch'. Nice. It gets better, right? 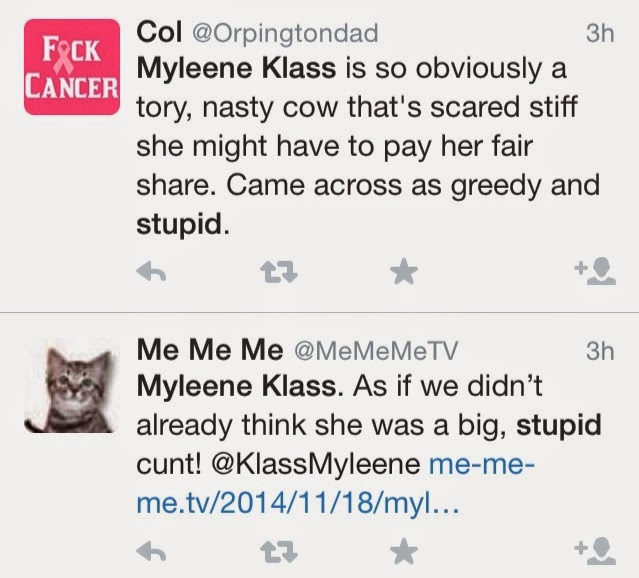 So, to add to the list we have 'tory, nasty cow' and 'big, stupid cunt'. Oddly again, that from such erudite Twitterers we have barely a fleeting mention of the Mansion Tax. Oddly again, lots of suggestion that Myleene is stupid and lots of baseless insults.

Sorry to list things. I realise that for right thinking people it's horribly depressing, but it's important. Isn't it interesting, that when a reasonably intelligent, articulate and successful woman voices an opinion she's not challenged on the opinion, she's challenged for being a stupid Tory bitch. I don't agree with Myleene on the Mansion Tax, I don't really follow her career but it makes me incredibly angry that while men are challenged on our views, someone like Myleene is belittled and denigrated because she had an opinion.

Next time somebody tells me that they don't understand what's meant by male privilege - they can bugger off.