A New Coalition? Calm down, dear.

I was reading last night a piece on the Indie website where members of our party were discussing how they felt a second coalition government would be difficult to get past our members. Is it just me, or have I missed out on a whole General Election campaign, and I've woken up a few days into May of 2015? Talking about another coalition is all well and good if it's a question of taking precautions and putting plans together, but, discussing the likelihood of a second one completely negates the process of election. 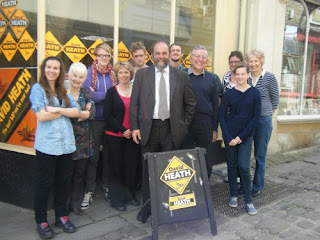 2010 was my first General Election campaign and I actually took a month off of school to be a part of it. It was probably a dangerous idea considering my A-Level exams were in the June, but it felt like something I needed to do. Some people who became very close friends and I travelled the constituency acting as some kind of roving campaign battle bus, delivering areas that we had gaps and canvassing like nobody's business. I remember the buzz after the TV debates, where it seemed that we were properly in contention. I remember the excitement of a Sunday I spent at Frome's artisan market where people were queueing to get posters saying 'I agree with Nick' and to have their picture taken with his life size cardboard cutout.

I remember the crushing feeling of waking up on that Wednesday morning to see that almost every newspaper was running a smear campaign on Nick Clegg and the Liberal Democrats and I remember driving to the count and feeling as though I was about to throw up. I remember winning.

Talking about the logistical issues of another coalition is fine, but I really don't think now is the time for discussing who would like it, or who wouldn't. I've been clear all along that I joined the LibDems because I want to see a majority LibDem Government. That said, if we need to work in coalition, we should do.

My point it this. Talking about who we would or wouldn't like to form a coalition with is pointless when no votes have been cast yet. Let's make sure we're ready and make sure our plans are in place, but how about we ensure that we have some seats in the House of Commons before discussing who they'll side with.
Posted by Sam Phripp at 04:45