I'm a child of the nineties. By the time I was born, the age of great peril had been forgotten. There was no major aggressor, extremist Islam hadn't really happened yet and the Cold War was effectively over. Of course, we know that the relative calm wouldn't last long, but the threat of World War was largely over. In that same sense, I find it intriguing to imagine that in 1983 the Government took part in War Games, modelling responses for Nuclear Warfare - even down to possible newspaper headlines. It's almost a novelty for me in a way.

Nuclear War isn't something that my generation has had to worry about. My Mum tells me that during her childhood she was quite regularly scared to death about the fact that a major nuclear strike could be imminent. That's something I never had to deal with. My generation were the ones who grew up imbued with suspicion of Muslims, suspicion of people rooting around in backpacks on buses, suspicion of people who didn't deserve it and were doing nothing wrong - the only thing I knew as a child about Russia was that that was where t.A.T.u. were from.

The release of files by the National Archive under the twenty year rule is a revelation for me. These files allow us to get a real snapshot of the work of Government at a particular time. For people like me, whose only experience was New Labour, it's a whole new perspective.

I'm fascinated with the way that Governments gear their citizens up for impending disaster. I remember reading the Government's 'Preparing for Emergencies' leaflet back in 2004 and being mildly panicked that danger could be lurking around the corner. Of course, danger wasn't, I've always lived in rural Somerset, and the only thing that lurks around the corner is a hurd of cows trying to extend your journey. There is of course an argument that these kind of emergency planning exercises are used to scare the general population. I agree with it in part. It may sound a bit Shock Doctrine, but it'd be a hell of a lot easier to justify another Middle East conflict if the general population thought they were about to attack us.

In that sense, the release of a draft Queen's Speech - drawn up as part of a planning exercise for Nuclear War - is even more striking. This wasn't something released for public consumption, it was part of a serious exercise. The speech makes pretty chilling reading, as the Queen asks the general public to help the helpless or homeless. For somebody who never really knew that threat (okay, so North Korea is troubling if I think about it for long enough...) the idea of imminent threat of that kind makes my blood run cold.

The fact that we can even consider whether a like for like replacement of Trident is right and proper just shows how far we've come. I hope that we've come far enough that when I have children and they have families, the idea of Mutual Assured Destruction is just as much a throwback as carrier pigeons or enigma machines.

Read the full text of the draft speech below. Makes very interesting reading. 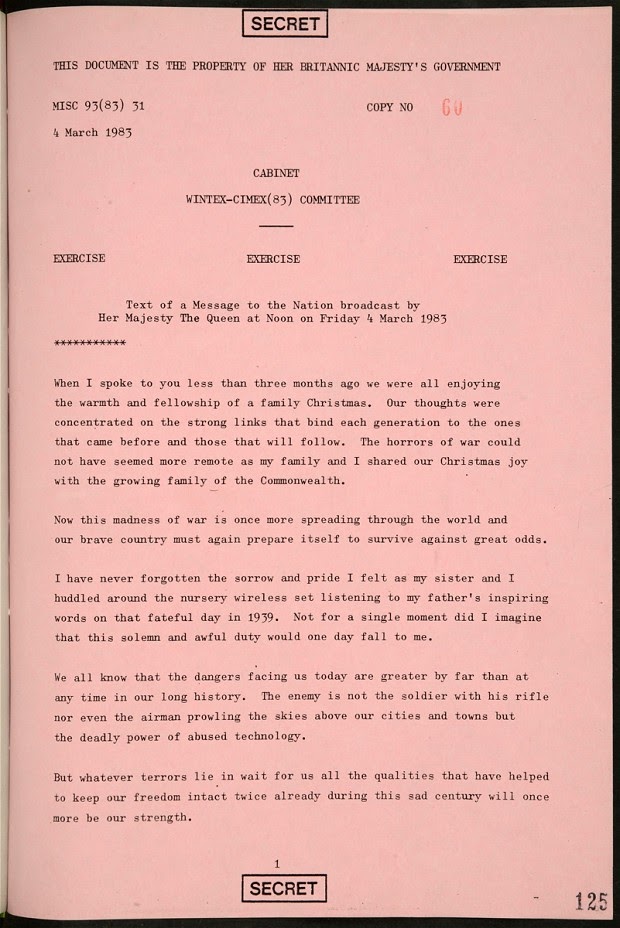 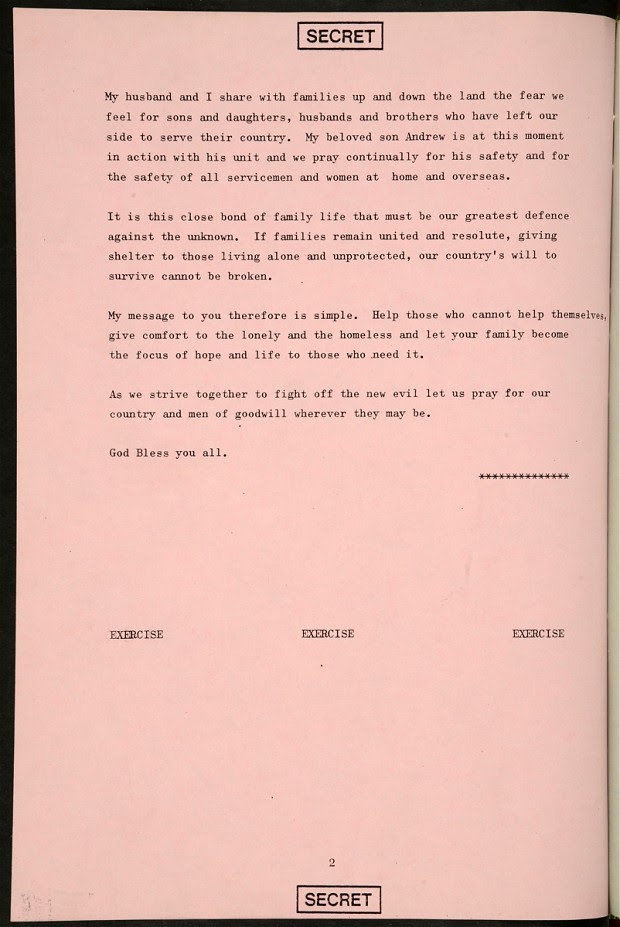