Now, folks, there's been something going on for a little while that I haven't mentioned to many people and haven't blogged about. Some months ago I applied for the parliamentary selection process in North East Somerset. I applied because it's an area that I care about, and I applied because I knew there wasn't a chance I'd come anywhere near getting it, and that it would be a great experience.

Last night, I was selected by the good members of North East Somerset and I'll go on to fight Jacob Rees-Mogg (amongst others) at the next General Election. I can't tell you the mix of feelings I had last night and today. I'm humbled, as I always am and will be when members of our party put their faith in me and I'm proud to move forward with another challenge. I'm also scared, excited and anxious to get started.

One thing that I did yesterday, was make a speech. As a Councillor, I'm used to speaking in meetings, but I've never been tasked with standing in front of a room of people and engaging them for ten minutes. Being anxious about this, I made a lot of notes, did a few redrafts (something I never do) and tried to make sure I was clear what I was putting across.

My page of notes, my collection of bullet points and my list of things to remember was then promptly left, by me, on the table of a Sainsbury's cafe, not in my backpack on the way to the selection meeting.

Whilst I think my speech would have been improved by the use of notes, I think I might commit to not using notes at all now - perhaps I won't miss them if I never use them!

Either way, there was one part of the speech that I was really proud of, which I don't think I got across very clearly and which, to be honest, I didn't want to go to waste. It's a very basic outline of why I'm a Liberal Democrat, and I thought I'd reproduce it here, having retrieved my notebook last night.

'People often ask me why I'm a Liberal Democrat - what it is that makes me walk all the miles and deliver all the leaflets. I wish I could say something worthy about how I'm committed to electoral reform or how green energy makes me tick, but it wouldn't be the whole truth.
The reason I'm a Liberal Democrat, is because I believe Liberal Democrats are a voice for the voiceless - and I know it because I've been there.
When I was young, successive Conservative governments vilified single parent families to the point that mothers including my own were given enough money to feed their children but not themselves.
When I was growing up and realising that I wasn't like other boys, Labour legalised Civil Partnership but still didn't believe that I should be able to marry - actually, properly, marry - the person I love.
The only people who who come to bat, every single time, for people like that, people like me, people who are marginalised are the Liberal Democrats.
That's why I joined and that's why I stayed, because the LibDems became a family for me. Just like family, we have arguments and upsets and difficulties, but just like a family, when our backs are against the rope, we pull together, we work harder, walk further and we go that extra mile for the people we represent.
I don't think we do it just to get elected either. We do it for the lady whose child has had six chest infections in as many months because her house is damp and the Council won't do anything. We do it for the young person struggling to get a job, whose only internet access is at his local library which is threatened by closure. We do it for those people who need our support, who the other parties have ignored or taken for granted, for the people who fall through the cracks.
If we don't do it, nobody else will do it for us. That's why I'm a Liberal Democrat, and that's why I'd like to be an MP, because people deserve a voice and people need to have someone on their side.'

Did you see the result from New York? Voters went to the polls yesterday to decide who their main party candidates were likely to be. At this point it looks as though Bill de Blasio, a public advocate has just clinched the Democratic nomination without having to fight a run-off battle with second place Bill Thompson. Christine Quinn, the Council Leader was beaten into a distant third on around 15% and reportedly didn't even win her own electoral area.

So what went wrong?

Chris Quinn's campaign has a lot of similarities with Hillary's primary campaign in 2008. Perhaps the biggest mistake was that she herself was the main narrative. Not because she was gaff prone or because she was particularly outlandish, but because she was on offer and she was the narrative. Painted as progressive, liberal and with a proven track record of getting results, nothing could go wrong. Or, as it turned out, very little could go right. 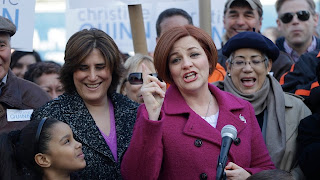 Many of the narratives used by the American media on Quinn were also used in the later stages of the Hillary campaign. They're pernicious, often not noticed and very effective at causing damage to female candidates. I don't even think they're used in malice, but they almost always have a negative effect.

Going into the final throes of the 2008 Democratic Primary, one of the candidates was branded ruthless, negative and driven. Oddly enough, it wasn't the candidate shelling out millions of dollars on attack ads. Hillary Clinton had started the campaign the frontrunner. She had high approval ratings, had knuckled down as the senator from New York and people had had enough Bush government to start to forget the difficult years of the first Clinton administration. Hillary was painted as polished, accomplished and unflappable. When Barack Obama started to print mistruths and outright lies about her policies, Hillary did what anybody would do and defended herself. There in lies the crime.

If a male candidate was being attacked and they responded robustly, it would never be remarked that he was particularly angry or ruthless. Dems da rules. However, if a female candidate defends her position in the same way - as Hillary did, and as Christine Quinn did - they become angry, ruthless and, most importantly, are stripped of their femininity. 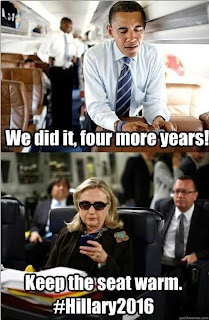 When Hillary was attacked by Barack Obama about her healthcare package, which he argued wrongly would force people to buy healthcare they couldn't afford, she responded with force and commitment. Those are two things that I think are good in a political candidate. The response? 'Hillary Clinton loses it with Obama', 'Hillary rants at Obama ad', 'Hillary gets down and dirty'. If anybody could be accused of any of those things, it was Sen Obama, who, behind all the hopes and yes we can's, had been using great sums of money attacking Hillary on TV and on radio.

Cut to five years later and we have a female frontrunner for Mayor of New York. She's got a track record of getting things done, she's a great fundraiser and she would make history if elected. Just as she pulls ahead in the polls, more and more stories pop up about how angry she is, about how she's a ruthless game player, and, most laughably - about how she had to have her City Hall Office sound proofed because she shouts too much. She stopped being soft, family Quinn from the ads and ended up the angry irishwoman.

Maybe these things are true, and maybe they're not, but, it doesn't take a genius to see what's going on here.

Female candidates are repeatedly trashed by a lazy American media which doesn't know how to tell a story. Female candidates are either a quiet, serene Jackie O, or they're a ranting, raving lunatic. God forbid the American people actually elect a woman to high office who doesn't just sit around playing the feminine idyll. God forbid the American press realise that women are people too.

Tonight New York voted whole heartedly for Bill de Blasio. This is the man whose campaign narrative was 'A Tale of Two Cities' - the divide between rich and poor in 21st Century New York. This is also a man who, right now, has a VIP suite at his Thank You party. There's a part of me that thinks New York will get what it deserves.

Yet again, a strong female candidate has been passed over. Yet again an opportunity has been missed. I hope that people start to realise the lazy column inch narratives that are used time and time again to attack female candidates. I maintain that Hillary would have made a better President (hell, she still might) and I think Quinn would have been a fabulous Mayor for New York City. Instead, we have a President who turned out to have very little behind his message of change and we have a probable Mayor for New York City who is - as I write - sipping champagne in his VIP lounge with his wealthy backers.