Not a great long essay, just a thought I had.

A while back, I thought I was alone in how winter made me feel. Some people argue that it's Seasonal Affective Disorder, some people think I just take too much notice of the seasons but what can't be denied is how horrible and hopeless this particular change of season leaves me feeling. What I've come to realise is how it's not just me. A great many people find the move toward winter a difficult time, and it's especially so in people I know who deal with mental health issues.

In that sense, just as, when it snows, we're told to check on a neighbour - perhaps it's the right time of year to check in on a friend you know is having a rough time. I personally find winter a time when it's difficult to find much hope in anything, and I also know what a difference it can make to know that somebody is looking out for you.

Give it a go - you never know what you might start.

Blurred Lines - The Summer of Sex.

There have been endless thoughts, musings and judgements over the summer over right and wrong - they're unquestionably linked with this piece, but it isn't really the same question I'm asking.

Is it right for Miley Cyrus to dance doggy-style in front of a largely teenage audience? Is Robin Thicke right to want to 'domesticate' a woman? None of these questions are for me to answer. Firstly, because, I'm not in a position to tell anybody what to do. But also, because, after a lot of privilege checking and soul-searching, I'm not in Miley's position, I don't have her experience, likewise, I'm certainly not Robin Thicke - these people make their own choices. I'm Sam, I live in Somerset and I've never twerked a day in my life.

I think the issue that is more interesting and more productive, is also less about judging people.

It seems to me that a lot of the public debates we're having at the moment are stopping short of the real questions. Is it right that The Sun still shows bare breasted women on Page 3? Is it right that I can turn on the TV at any time of the day or night and see Miley swinging naked on a wrecking ball? All of these questions fall short. To me, the question is about the blurred lines of sexual content and the problems that blurring presents us with.

It seems that the content, as it were, isn't the issue. People have been getting naked to sell records for decades now. When I was young, Robbie Williams was stripping down to very little to try and shift copy of Rock DJ. In the eighties, Madonna was testing the boundaries of how much the public actually wanted to see. This latest spate isn't really surprising. Miley Cyrus' antics this summer don't really cause me moral panic, it just tells me that the 'Good Girl gone Bad-a-tron' has whirred into life again - taking in middle-America's country sweetheart and spitting out the twerking, wailing thing we have now. It happened to Rhianna before her, and Britney, and most of the others. It isn't a matter of our changing moral code, it's a matter of a jaded music industry bringing out the same tricks to sell records.

So, the issue for me isn't morals. The issue for me is more about classification. At Liberal Democrat Conference this autumn there was quite a debate about Internet Filtering - specifically in relation to access to pornography. The question was, how do we stop impressionable young people accessing content that is deemed inappropriate for them. It's a question that still doesn't have a simple answer, but it's also a question which completely ignores the brunt of the problem.

Of course, this is all about tolerance levels. Decades ago, Elvis gyrating on television sets caused a stir in middle America, similarly, Cher caused a commotion wearing a sheer body suit in the eighties. There is, however, a difference (bluntly) between Cher straddling a cannon and Miley Cyrus baring her vagina.
To me, the question isn't about whether this is right or wrong. In my house, Miley's side-boob doesn't really raise an eyebrow (my reaction was more that she's likely to catch a cold) - but in other houses, it would be inappropriate. Josh and I aren't really affected by people swinging naked on wrecking balls, but if we had a son or daughter, I'd rather they weren't surrounded by such imagery.

Similarly, there's far more nuance here than we might expect. So, we might all think it's wrong for Miley to twerk in front of American tweens, but is it wrong for Katy Perry to sing about seeing someone's 'peacock'? Is it right that a song on her album which contains the lines 'you give me that hummingbird heartbeat, spread my wings and make me fly, the taste of your honey is so sweet' isn't listed as explicit? Can metaphors be considered explicit too?

It seems to be high time for a proper debate on what we consider to be public decency. This isn't me going Mary Whitehouse on anybody - it's me saying that we need to have a proper, informed debate that creates a new system (or improves our current one) so that people can be properly informed about what they're watching. Currently, we live in an anachronistic place where the video for Blurred Lines has become ubiquitous, but the Daily Mail was up in arms about the fact that Lorraine Kelly showed a live Breast Cancer screening on her daytime TV show.

We need to find a new order, where things are categorised properly and where a sensible deal is reached. People should not be shamed if they seek out content that is perfectly within the law, but also, people shouldn't be made to feel uncomfortable by being confronted with such things over their Cheerios. 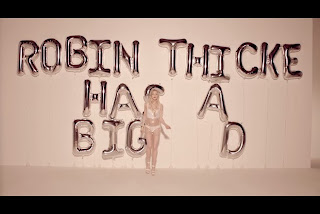 We should be able to find a pragmatic solution that really does allow us to have our cake and eat it. Then, Miley can party on as much as she likes and whether Robin Thicke has a big 'd' will - rightly - become an irrelevance.

Note
I've been frustrated by the number of pieces written about whether various people mentioned here are right or wrong. I hope that this one seeks to do a bit more than that. I'm personally quite a fan of Ms Cyrus' music, and I tend to think that her music videos have some merit too. I think what we have here is a convergence of two issues that need not be confused.
Posted by Sam Phripp at 16:04 No comments: