As many of you will know, February is LGBT History month. Around the world, events are held that look our collective history in the face and try to reach some kind of understanding about where we've come from. More often than not, these events focus on educating young people about people or events they might not know about. I'm happy to admit that I didn't know much about Harvey Milk's work before the film was produced a few years ago. And that's the issue, if we're to get anywhere, we need to know where we've come from.

All of this came together for me, when my partner and I visited the Auschwitz Concentrations Camps during a recent visit to Poland. I can't quite explain what it was that compelled us to visit, I think it was a mixture of historical curiosity and a need to try and make some kind of sense of it. What I found was, of course, harrowing. The visit left me reeling for a few days afterward, but it also left me with more questions than anything else. 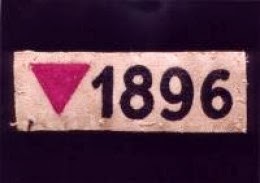 In deciding to go, I'd done a certain amount of research. I think it was part of a process of understanding things before we visited, in some kind of bid to protect myself from the shock of it all. The part that I particularly connected with was the treatment of homosexual men (*the Lesbian experience was somewhat different, only because the Nazis didn't believe lesbianism to pose the same 'threat' to the furtherance of the Third Reich, though was horrific in its own right) - I guess it's easier to comprehend things if you feel that you have some connection with it. I'm also aware that understanding what happened to around fifteen thousand men is a slightly easier task than beginning to comprehend the mass killing of millions of innocent people.

What I found at Auschwitz was surprising, however. Whilst I'd fully expected the most part of the visit to focus on the treatment of European Jews, what clearly was happening was some bid to allow every affected community to remember. The buildings of Auschwitz I were hived off, one remembering Russian people held at the camp, another remembering members of the Romany community. Each building, divided off and used for individual communities in their acts of remembrance.

On only one occasion, however, did I find a reference to the gay men interred at Auschwitz. This isn't surprising, because what happened after the war ended was almost as shocking as the treatment of these men before 1945. Having survived the Nazi death-camps, gay men were often re-arrested for 'repeat offenses'. They were often beaten and seen as 'true criminals' - their experiences discredited because they were seen as 'less innocent' than others.

Similarly, during the war, these men were subjected to their own version of hell. Often isolated and housed in barracks solely for 'sexual deviants', these men were forced to sleep with their hands outside the bedding - beaten if they were found with them elsewhere by morning. They were often forced to work even harder than other inmates. In other experiments, they were forced to have sex with 'prostitutes' (often women also held captive) whilst Camp Officers watched, in some sick attempt to ex-gay them. This in itself contributing to the fact that gay men were far less likely to survive in camps than other communities.

To me, LGBT History month is an opportunity to remember everything that is good and proud and right about the struggle we've been through. It's a fantastic opportunity to understand the events that have led to equal marriage being granted in the UK. But it's also a time to properly reflect on our history and the parts of it that have been erased. More than one hundred thousand men were arrested and tried for homosexuality in Nazi Occupied territories, and around fifteen thousand men were sent to concentration camps for being who they were. These men were talented, passionate and loving people - they deserve to be remembered this month more than any other.

For those interested, there's a very interesting documentary on the subject on YouTube called 'Paragraph 175' - the particular law relating to homosexuality in Nazi Germany. I'm not sure if it's meant to be on YouTube, so, just be aware.