A note about my Resignation

I was contacted today by an officer of the County Council, who have received a number of complaints about their statement that they would not be investigating any issues related to me. I want to make it quite clear that none of the behaviour I outlined below that contributed to my decision to resign involved a current member of the County Council, nor did any of it take place at a County Council meeting. As far as I'm concerned, the issues that do exist are to be investigated by political parties, and not by Local Government bodies.

One point that I would make, is that it seems strange to me that I'd only be contacted today by the County Council. They have at no point acted wrongly, but it would strike me as better practice that they would contact me immediately after the blog that I posted. Perhaps, this is something that the Council Leader could have done rather than attacking me in the papers. But, that, after all, is politics, so there we are.

My apologies if I didn't make it clearer that Somerset County Council isn't a guilty party. This blog talks of a wider culture that I have found is toxic, and that I think probably deters most even-minded people from entering the political arena.

This is a post that I've known that I'll be writing for some time now, but one that I've been, quite simply, absolutely dreading.

I was elected for the first time to District Council in 2011, and elected again - taking a Conservative seat on the County Council - in May last year. Every single time that somebody takes two minutes out of their day to go and vote for me, it's a really touching thing. I take my responsibilities as a Councillor, and my responsibilities to those people incredibly seriously.

That's why I have to resign from Somerset County Council today.

I entered politics for a very simple reason to - in whatever small way - try and make things better for the people that I know and grew up around. That's what politics is about. I'm proud that in the fourteen months I've been a County Councillor, I've secured new funding for First Schools in my division, funding for Harry's Hydro, a charity offering hydrotherapy to those who couldn't otherwise access it, secured funding to solve heavy vehicle problems in Norton St Philip and did my part in the campaign to save a crucial rural bus service, the 267 between Frome and Bath. All of those things are reasons that I have to be proud, and reasons that I take forward to be happy about my time as member for Frome North.

I have to be clear however, that one of the main reasons I'm resigning is because it's becoming almost impossible to do my job properly against the obstruction coming from other politicians. I've always been happy to work across party boundaries to get things done. As far as I'm concerned, as soon as the elections are over, we all work together for the good of our areas. I've been met with such resistance, and - at times - such hostility, intimidation and bullying that I simply can't and won't go on any further.

We have a real question to ask ourselves about why 'real' people don't get involved in politics. I have a few of the answers, and they're all reasons I'm stepping back. During attendance at my first ever Council Meeting, my partner overheard me being referred to as 'that dirty bloody homosexual'. I've had time taken off sick characterised as time taken off on holiday. I've been chased down the road by a Conservative candidate shouting at me because I'd been speaking to local people outside of a shop. I've been harassed on Twitter to the point of having to block and report people - something I always vowed I'd never do. I was told that I'd only won a seat on the County Council because I lied (note, I didn't, and haven't lied...), I was also told that during recent elections activists from other parties had gone door to door telling people that I was gay - as if it would be a reason not to vote for me.

If ever we ask ourselves why more 'normal' people don't want to stand for election, please take that as a 101 from me.

I'm proud of the work that I've done as County Councillor for Frome North and I'll move forward (into a by-election) feeling positive about my contribution and committed to seeing another Liberal Democrat returned. The reason that I came into politics in the first place, and the reason that remains, is that I care about people. That's also the reason that I joined the Liberal Democrats. Because I know that nobody else matches our party when it comes to working hard and caring for their communities. That's what I'm passionate about, and I hope that you'll forgive me for leaving the more abusive stuff behind.

There will ensue a really hard fought by-election (I only won by 45 votes!) that I hope LibDem colleagues will support us in. It's important to me, and important for our Local Party that a Lib Dem Councillor is elected and that local people are served in the way that they deserve.

I know that I'll look back on my time as Councillor for Frome North with fondness, and I'd like to thank you for being a part of it. For those few days in May last year, me, my partner and some friends of ours decided that we'd go above and beyond to win and to serve local people - that time is a special time that will remain with me forever. 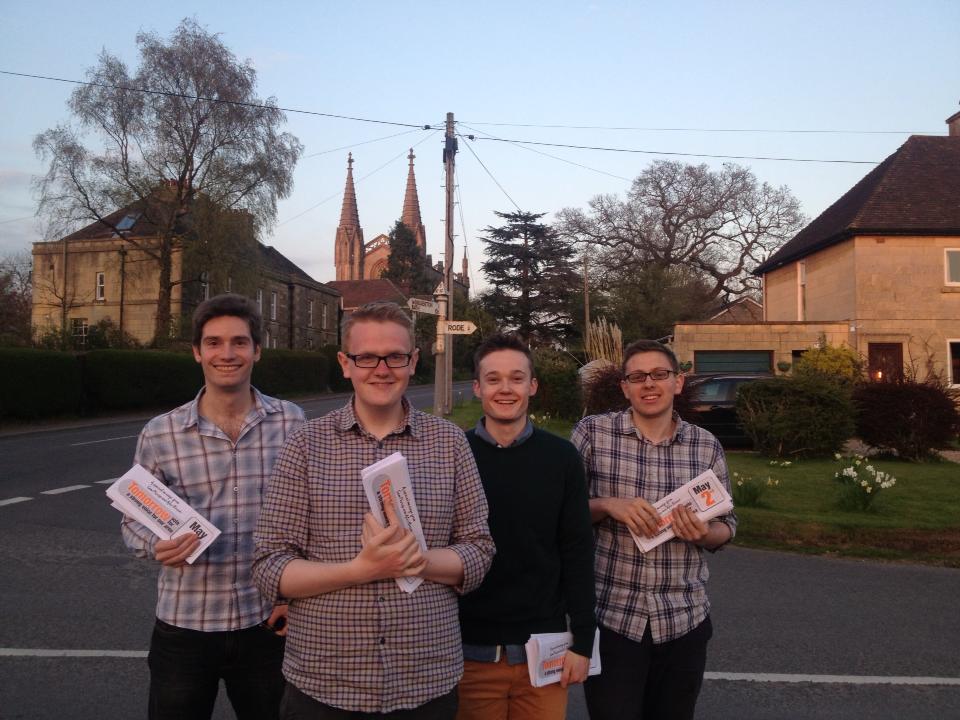 Sarah Yong stands down as Somerton and Frome LibDem PPC

I just wanted to put on record, how incredibly sad I am to see that Sarah Yong has stepped back from her role as LibDem PPC in Somerton and Frome. I've known Sarah for a few years now, and know that this decision won't have been made lightly. I also think that it's important that it's put on record the incredible work that Sarah did during her time as our candidate.

As a County Councillor, she took time to speak to me directly about issues affecting people in my division and actively sought solutions for problems that arose. When bus services were threatened in Rode, she made no fuss, and did no glad-handing, but delivered letters with me, informing local people what was happening. She took time to speak to people - often elderly - who were incredibly worried about how isolated they'd become after the bus service stopped. She knew implicitly, as somebody who grew up in Somerset what a blow it was to local people. That's why we selected Sarah, and that's why I'm sad today, because she's a great campaigner who wants the best for people.

Perhaps the most touching thing that she did, however, wasn't on a doorstep, and it wasn't whilst giving a speech. It was in a strategy meeting with other local Liberal Democrats. When asked if she got to Parliament what she'd like to change, she thought for a while, and said that for her, improving mental health services for vulnerable people would be key. She knew, as I do, that unless you can afford to pay for support, you're part of a postcode lottery within the NHS. In that moment, Sarah was speaking from experience, and she was saying that she'd look out for people who were left behind.

Obviously our local party will now have to select a new candidate, who we'll stand behind, and who we'll work to ensure becomes the MP for Somerton and Frome. So long as they carry on David Heath's hard work, and so long as they have half as much heart as Sarah Yong, they'll have my full support.
Posted by Sam Phripp at 10:10 No comments: