I just learnt of the death of Joan Rivers, and I'm writing this whilst feeling really quite upset. Upset that the world has lost an original comedy legend, and upset because I have a feeling her death will be characterised in certain ways by certain people.

Joan Rivers was a comedian (I don't use the word 'comedienne' because having a vagina makes very little difference to anything) who made people laugh for decades. She knew that her job was to entertain people and she did absolutely anything to make sure people got what they paid for. She's become notorious for tearing people to shreds on shows like 'Fashion Police' and 'Joan and Melissa' and it's something that she does with incredible skill. It's odd really, because the impression could be given that the hateful words she said often equated to hateful deeds, that she was a bad person, and this is the distinction I think it's important to make.

For example, Joan makes a joke in the clip below about how her perfect child would be Helen Keller. It's a pretty extreme joke, and in the clip she's heckled by a man whose son was deaf, she then tears him down pretty quickly and rescues her show with the deftness of a real pro. What the clip doesn't show, however, was that after the show, she spent over an hour scouring the venue looking for the heckler to explain what her comedy was and make it clear to him that she was upset that she'd been so heavy handed with him. It's an example of somebody who will let nothing get in the way of the momentum of her show, but who also has absolute empathy with the people who find her shows too close to the bone.

Josh and I went to see Joan when she performed in Brighton a couple of years ago, and I have to say that whilst most of the show had me in fits, there were parts of it that were just that touch too far for me. But that's comedy. That's how comedy works. I don't like Frankie Boyle because too often he goes too far, but I think the skill Joan showed so often was taking people just far enough over that line to make things tingle.

What I'm not going to do, is even start to defend every joke or comment Joan Rivers ever made. She made some comments recently about the Israel Palestinian Conflict that were really abhorrent, and even I watched the clips not knowing quite what to make of it. But here's the thing about that distinction - there's a massive difference between hateful words and hateful deeds. Yes, Joan Rivers made incredibly challenging comments about Gaza, yes she made jokes about absolutely anything (she was in New York on September 11th 2001 and refused to cancel her show) but she was also a woman who delivered meals to the sick and disabled at Thanksgiving. She sent the children of all of her staff to private schools. Whilst the headlines of the jokes might give you one view of Joan Rivers, there was also a very different, very private side that supported and cared for people and chose to do good. I'll say this now - I would rather that half the world spoke absolute trash but did the right thing, it would make a nice change from the current status quo where many people will do nothing to offend anybody, but where they'll also do nothing to make the world a better place.

I'm incredibly sad, because Joan's passing marks the end of an incredibly complex life and a glittering career. It marks the end of a life that was committed to making people laugh, and committed to blazing a trail for other female comics. And it also marks the end of somebody's life who often made so many people feel free, in a world that is perpetually offended. In Joan's performance in Brighton she made a joke about how the audience should hope that she dropped down dead on stage, because it would mean we'd get invites to dinner parties for the rest of our lives. I'm glad that Joan had more privacy, and I hope that what will be an incredibly difficult time for Melissa and Cooper doesn't become tainted by the inevitable tussle over Joan's legacy. I for one am incredibly grateful that my sister bought us tickets and that I had the chance to see Joan live - it was an experience I'll never forget.

So, there it is. See you later, Joan, you wonderful, hateful bitch. 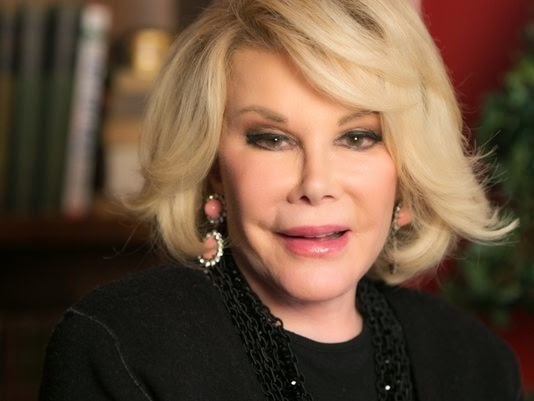