We need to talk about willies.

This is a post that I've been meaning to write for quite a while, but was reminded when Caron Lindsay posted a link to this piece on Facebook. In it, we hear that Deputy Leader of the Conservatives in Scotland referred to our Leader as 'little Willie Rennie'. GEDDIT?! It's a dick joke! I always think; no better way to serve your constituents and the party you're proud of than standing up on a national platform and making penis jokes, right?

Not to be outdone, In January of this year, we have George Osborne telling a joke about how Ed Balls needed 'new crystal balls', as he'd been proven wrong on the economy. Let me tell you, these lads are not simply restricted to penis jokes, they can tell HILARIOUS jokes about testicles too.

*excuse the interlude, I'm trying to compose myself again - bare with me while I try to stop hyperventilating* 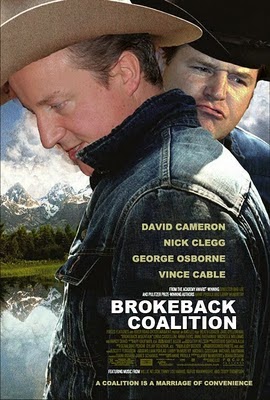 The top joker, for me, however, is everyone's favourite irascible uncle - David Davis! He apparently parroted a line about the Tories and Lib Dems being in a 'Brokeback Coalition'. First of all, I'll defend both the short story and film of Brokeback Mountain until my last breath.Annie Proulx is a genius, and I won't laugh at a story about love in a time where it was outlawed, and I won't laugh about a love that ultimately sees people murdered on a near-daily basis. More than that though, the joke here isn't about Brokeback Mountain, it's about the suggestion that David Cameron and Nick Clegg might be gay together. You may be able to sense that at this juncture, my sense of humour is starting to fail me. I don't think that laughing about the suggestion of a gay relationship is a very nice or clever thing to do. I also don't think that suggesting some kind of 'backward' sexuality in an official Government Coalition Agreement is a very classy thing to do.

Quite frankly, I'm a voter. You can probably guess who I vote for, but I'm a voter nonetheless and I think our politics is tarnished by this kind of school-boy 'lad' humour. They should be utterly ashamed that while our creaking benefits system was accidentally cutting off payments to vulnerable people, they were standing up in the Commons making cock jokes. Similarly, all of the people involved will happily extol the need for more women in politics, yet I'd guess that this kind of atmosphere is only going to put women off - not because they're delicate and worried about such jokes, but because most people want to work in an intelligent and professional environment - not the political gutter.

I really hate the fact that it seems okay today to make penis jokes as part of a national political discourse. I don't like the idea that joking about somebody's balls is considered funny or correct. Even more, I have absolute disdain for the creeping, homophobic insinuation of the 'Brokeback Coalition' comment. If we're supposed to believe that politics in this country is any more than a petty old boys club - where people make up for the fact that they were socially awkward teenagers by making jokes about manhood - some of our politicians are going the wrong way about showing it.

But that's fine. I'm a liberal. It's not my place to stop anybody saying anything. Carry on making penis jokes as long as you like, but you're only making dicks of yourselves.
Posted by Sam Phripp at 01:53